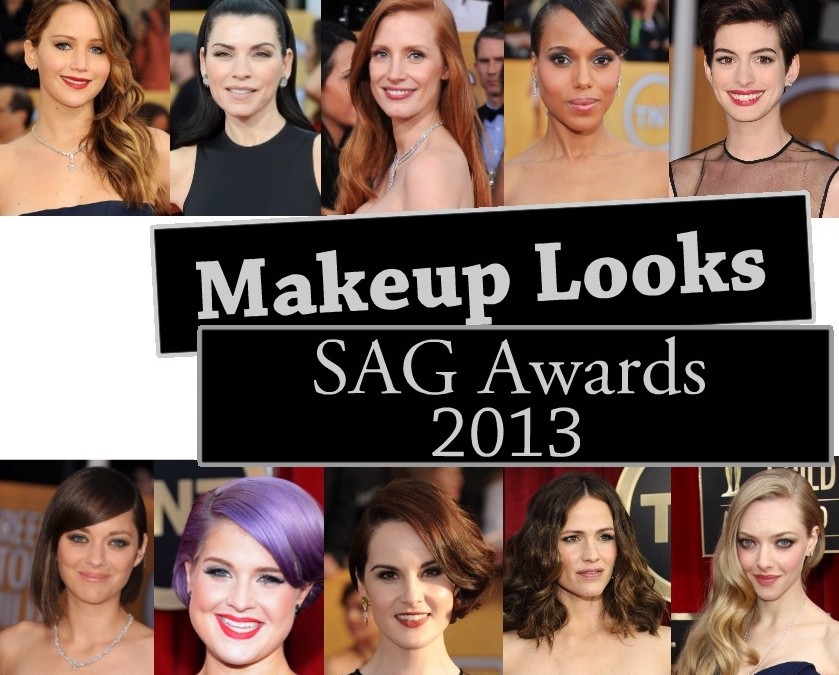 The Screen Actors Guild (SAG) Awards took place last weekend as part of the award season extravaganza (which started here) and red carpet photogs took copious amounts of nice pictures and notes on the looks of the evening. There was an old Hollywood glamour trend, much bigger than at the Golden Globes. Hairstyles were pretty much side-swept waves and retro inspired styles. The makeup was a bit deeper overall, darker hues were present in the eyes and lips, complexions still looked pretty glowy and radiant, though. The key to the perfect SAG Awards look was vintage inspired. Let’s take a look at my favorites and do let me know which ones you liked best!

I never thought purple hair could be so glamorous and chic! Seriously, Miss Kelly looks gorgeous in this retro inspired look. Pink cheeks on a flawless, matte finish complexion; the eyes have a neutral tone on her lid and a darker, brown/caramel shade on the crease to add more definition. Eyeliner is the star of the look applied to the top lash line, ending in a flick, and both top and bottom waterline. Luscious long lashes and an orange undertoned red lipstick complete this look.

Lady Mary (reference to the series Downton Abbey where Michelle stars) caused a bit of an uproar with her dress which looked quite sleek and elegant from the front, but as soon as she turned, BAM! Total sheer showing some side boob. Her makeup look was very elegant and again, vintage inspired. Her porcelain skin is pure perfection with just a touch of blush with the key accents being the lips and the eyes. She wears Chanel eyeshadows in shimmery dark tones (including a nice taupe cream shadow along the lash line for sparkle) all over and to finish the look a matte shade of dark red lipstick. Like an updated 1920s flapper girl!

Returning for a second round, Amanda Seyfried goes dark this time around. She probaly had one of the overall best looks of the evening, from the dress, the accessories (although some hated her statement necklace), the hair, and of course, the makeup. However, the look is incredibly simple to pull off. She has some dark navy and dark brown shadows on the lids and crease (to complement her Zach Posen gown) and only dark brown hues on the bottom lash line. Lashes are very full, so a volumizing mascara is key. Cheeks are a light rose shade and the lips are a pretty berry shade.

Another one for a second round! And the best part of it all? J.Law actually attended the awards while sick with pneumonia! She does not look one bit sick to me, which show the power of good makeup (and youth…after all, she is just 22!). The healing powers of a bright cherry red Dior lipstick are proven here! Her eyes are a bit of a departure from her usual dark water line, well, lined eyes. Instead she opted for earth toned shadows all over the lid for some depth and eyeliner in top (in a sexy cat eye shape) and bottom lashline. Loads of mascara in the top and bottom lashes give the eyes a sophisticated, yet sweet appearance to the look. Maybe I should put this makeup on to help with my own ailments!

Another lady who decided on a navy look, not just on her dress, but makeup as well. Or maybe it’s dark grey, with all the shimmer, maybe her baby blues reflect on the shade making it look navy. In any case she looks great, too. And apparently she also was sick with the flu, but again, with the magic of makeup you can’t really tell! Her face is perfection, it’s almost as if her face is naturally flawless and she does not need foundation! She has a very small amount to peachy toned blush and a nude color lipstick on her beautiful lips.

Jennifer Garner’s look is just effortless chic. When searching for information on who did her makeup and what products she wore, the information was mostly focused on her beachy waves and fabulous gold dress. That’s why her look is so great. She has accentuated her lips with a light rose hue which I like much better than the nude hue she wore for the Golden Globes. The rest of her makeup is really minimal, a little pink blush, a little shadow to define the eyes, liner, and mascara and a well defined brow. It’s pretty without taking over the real star of the look which was the dress!

Annie dear, you are just stunning! Everything about this look is fabulous, from the hair, the dress, and her all Chanel makeup. Her lips are a beautiful deep rose color which complement her beautiful porcelain complexion. She has a subtle hint of blush in a rose with a peachy undertone to it. Her eyes only have a little shimmery mauve shadow along the crease, the rest of the lid is nude, only liner on the top waterline and mascara on the top and bottom lashes. Both awards she’s come out a winner and I have a feeling at the Oscars she will, too. I only hope her look’s a winner, too!

Thank goodness Miss Jessica bounced back from her Golden Globes look and showed up to the SAG Awards every bit the movie star she really is! The dress, the hair, everything was wow! Some people say her dress was ill fitting, which I didn’t, especially in comparisson to the Golden Globes one. Her eyes were stunning in gold and taupe Lacôme shadows and a lovely YSL rose lipstick. Her cheekbones are lightly contoured with a bronzy shade and the whole look is minimal, but very movie star gla orous. Now the key questions are will she get the Best Actress nod or will her fellow nominee Jennifer Lawrence, and will she go the Golden Globes route or the SAG Awards one for her look? I do hope it’s the latter.

Check out those cheekbones! Fierce! My girl Kerry looks AMAZING here. I liked her at the Golden Globes, but was not too fond of her hair, which kind of overpowered her makeup and beautiful face. At the SAG Awards, however; she shined. She wears a purple smokey eye (plum on the crease and lower lash line and lilac on her lid) with dark liner on the water line and suuuuuuper long lashes. Her lip is a pink/peachy shade which is a combination of lip liner and gloss applied to the lip (all products are Chanel). This whole look, together with the hair and dress, just works beautifully. I may have a little girl crush here

Julianna Margulies seems to be channeling a sexy 1960s superstar and I’m totally diggin’ it! Her face is gorgeous and I love how she proves you can be a mature woman and still be rocking and hot! There is nothing particularly special about her makeup, in fact is quite minimalistic, but that’s the beauty of it: looks elegant and really flawless without trying too hard. She wears a nude shade of eyeshadow with a little dark shade along the crease for definition and of course black eyeliner and loooong lashes. Her peach toned cream shadow adds a touch of color to her porcelain skin and nude lip shade. Groovy!

On a side note, what’s up with Kaley Cuoco? She went with this vampy look for the Golden Globes that totally clashed with the rest of her look and then looked like she was wearing the worst wig ever for the SAG Awards….. Oh well!

What do you think? Who were your favorites and your not so favorites?