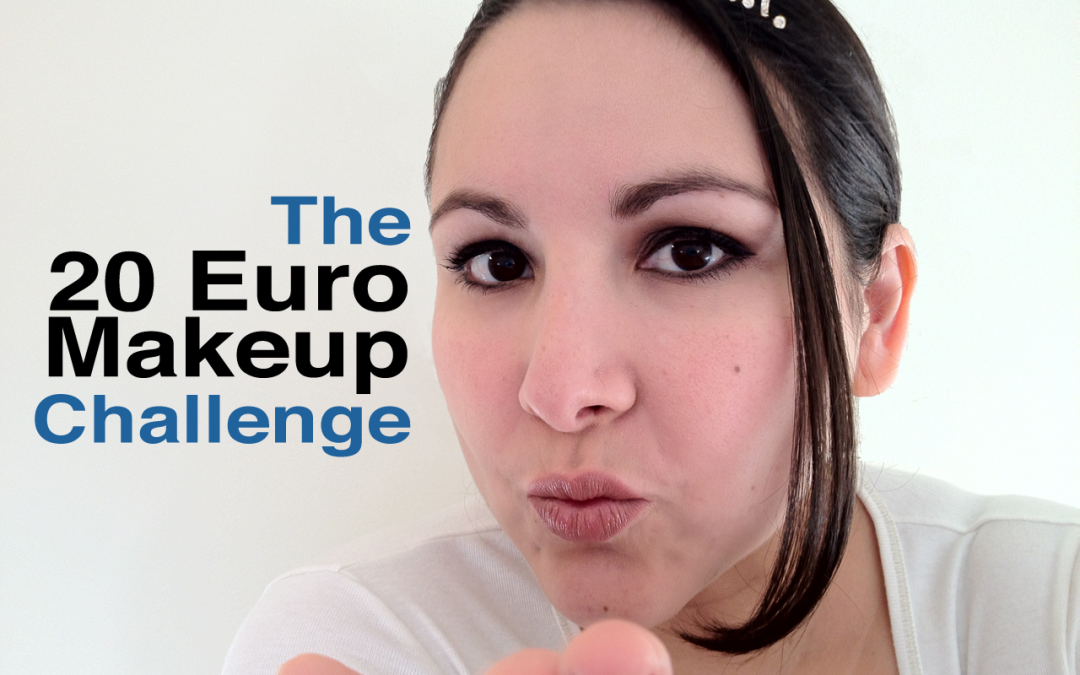 There are a bunch of makeup tutorials on YouTube with the tag The Makep Challenge. Given my taste in makeup products and how absurdly expensive it can be to maintain such “luxury” I thought, first of all, this challenge is bullsh*t for us who live in Europe! Most makeup products are marked with the same 2 digits as in the US, only in our stores it has a € sign, or worse, a £ sign. Second of all, even if it were possible to achieve a look with so that amount of money, I wondered how long it would take for my face to melt after using products that only affords.

But I was at least curious… Could it be possible to do a look for 20€ (since this is the currency where I live) and still be able to keep my face? Do note, this challenge requires you cover both products AND tools for that amount. All of a sudden this felt like going into a fight with Liam Neeson armed only with a beach ball (which if he were armed with would still kick mine and an entire army’s ass).

The good news is not only did I manage to meet the challenge, I did so UNDER budget (total of 18.43€). And I feel particularly proud I recreated a lovely look from the September 2012 issue of Glamour with Victoria Beckham…

On the left is the cover of the September 2012 issue of Glamour Magazine with Victoria Beckham. On the right is one of the pictures that was available on the gallery, which I chose because it’s the best view of the eye makeup.

Here’s a snapshot of the products I’ve used (or intended to use) and the individual prices:

Yes, there is a pacifier in the picture. This was not used in this tutorial, but I noticed it was there after I took the photo and started working on the post. Lovely how it blended in with the rest of the products!

I started this look without much planning and halfway through I realized I had to nix one of the products or I would’ve been over budget. There will be another post where I’m making a whole product haul and give my individual review of each. But let’s just get started with the tutorial:

Here’s my overconfident face, wonky eye included, with nothing on, not even moisturizer (no budget for it)

Doesn’t look bad in pictures, but I do have a couple of blemishes and the usual rosacea redness

I took the HEMA Cover Up! Foundation in 02 and applied as shown above to blend with my hands. The cheapest foundation brush I could find was 2€ and it felt like a freaking broom on my face. Even sponges were too much because they don’t come as singles, only in packs of 2 or more.

Not a good start. This foundation is crap. When I first got it it felt nice. I tried once and I thought it was ok, but maybe more suited to someone with oily skin; the stuff was just too dry for my combination skin. Then for this tutorial, it felt HORRIBLE. It was clumpy, hard to blend and maximized every wrinkle on my face. It barely covered anything. Needless to say, those 5.50€ were tossed in the trash!

I accidentaly deleted the picture were I was applying the shadow, so here you need to imagine me taking that little shitty sponge applicator and applying shadow. I used the warmest brown of the two available on this Park Avenue quad. Nice shade, not a lot of fallout. Good call on this product! I applied on the outer V and worked my way in on the crease. I then filled out the rest of the lid.

Because the shitty applicator doesn’t really do much in the blending department (and I had no budget for other brushes), I used the good ol’finger to soften the line and give it the shape like Victoria Beckham has in the photos.

Using the same sponge applicator, dip the tip on the same shadow color and apply very gently on the lower lash line. Gently is an important part because sponges tend to tug more on the delicate eyelid skin and that can cause premature wrinkles. You don’t want to save money on makeup to have to buy expensive creams (or Botox) because you now look 10 years older.

Posh has pretty dark brows in the photo and mine are not exactly that full that I can get away without filling them. I did not get a pencil liner (you’d think it’d be cheaper, but I actually found a pretty cheap liquid liner), so I took a gamble with the shadow and put it on my brows. Gamble paid off, it looks quite ok.

Now comes the awesome liquid liner I manage to get. This is a 2 in 1 Eyeliner from Essence, a fairly common “drugstore” brand here in Belgium (and when I say drugstore you know I mean stores selling cosmetics and beauty products, like Di and Kruidvat. For those of you non-Belgian readers, drugstores here sell much more expensive stuff!). I applied a thick line using the felt tip applicator and winged it at the end.

Because I don’t have a pencil liner and liquid liner doesn’t really go on the waterline (in the photo she is clearly wearing something on her waterline), I applied some of the liquid liner on the lower lash line, to give it that same intensity. Instead of applying one continuous line, I applied tiny strokes so the line would not look so rough.

Using the shitty applicator (which doesn’t feel so shitty all of a sudden) I gently smudged the line immediatly after applying (once it’s dry, no smudging will happen). Since the applicator still has some leftover brown shadow, it adds a bit more color and texture to the look.

Since I don’t have budget for fake lashes, like Beckham is clearly wearing, I had to use all the help I could get with my not so full lashes. I applied 2 coats of NYC ShowTime Mascara, which turned out to be pretty magic. Product went on both top and bottom lashes.

Here I had to make an executive decision. Using the intended Maybelline product as blush would’ve put me 2€ over budget, so I decided to nix the blush and use my lipstick as a “cream blush”. Luckily the shade was very similar to the blush, so it worked out. In the photo, Beckham wears very little color on her cheeks, mainly you see a bit more contouring with bronzer. And finally, apply the Park Avenue lipstick in this gorgeous nude shade on the lips. After this I had to grab a hairbrush because the frizz was just mad. This was not included in the tools because, well, it was to fix my hair, not makeup! 😉

And we are done!

And here’s the look minus the bathtub, bubbles and crown

Looking back I could’ve added more “wing” to the eyes, but I thought this was pretty damn suitable for my eye shape. I managed to make my eyes look bigger and that’s ok with me. Below are a couple of closeups of the eyes

I hope you like this and make sure you check out the products haul to see which of these makeup items were good and which weren’t (but you probably can guess by now. You should still read the post, though!)

A Glam Summer Look For Day Or Night!