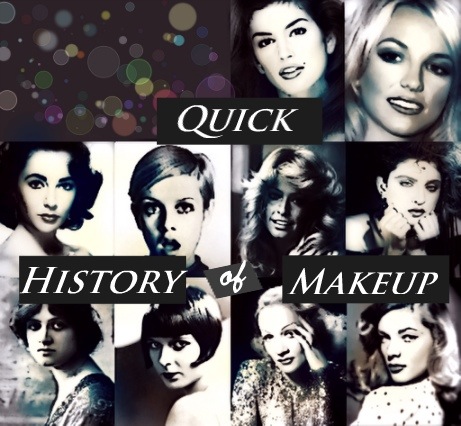 When I decided to write this post I was watching a modern 1960s-inspired makeup tutorial by Pixiwoo and thought to myself: “you could really summarize the whole trend in that decade in 1 sentence.” The subsequent thought was that, in fact, all decades could be summarized in 1 sentence. No, seriously, you can! I’m sure before you even read, you are already thinking of those sentences!

First I thought about all the sentences per decade and earched for all the photos to illustrate. But the history geek in me wanted to elaborate on those little tidbits of information, so there are 2 ways you can read this:

1. Read the headlines, look at the pictures and move on to my next post. How about a little shopping since you are here?
2. Read it all, bask in the glamour of the old days, and then go ahead and buy some makeup to recreate the looks! Demure and feminine. Makeup is for hookers!

Back in the day (which is mainly late 19th century and beginning of the 20th), makeup was a thing only prostutitues and actresses (often thought the same profession) would wear. But here’s the real deal: even respectable women would wear something, it was not just something you public admit to, so it had to look natural! On certain ocassion you could pull off a more elaborate look, look at movies like Titanic or TV shows like Downton Abbey for modern interpretations of the styles examples.

Screw demure! Pass me the kohl eyeliner and the red lipstick!

The Roaring Twenties was the time women pretty mich said “screw conservative” and would take out their little compacts and powder their faces right there, in public!I It was in a way a celebration of life, after the devastation caused by World War I. The first silent movies made actresses beauty icons regular women would emulate in style. But it was not just movies. Women started to take a more prominent role outside of the home and into the workplace, so some of the rules started to change. Remember the flapper girl? She had short hair, short skirts, and pants! Hollywood really takes off in the 1930s with “talking pictures” or talkies, as they were known. A lot of these famous Hollywood icons emerged here: Betty Davies, Joan Crawford, Jean Harlow, Greta Garbo, and the fierce Marlene Dietrich. You see there is an evolution from the madness of the 20s with a more refined look (see? Practice makes perfect!). It also contributed that this decade suffered the aftermath of the Great Depression, one of the worst economic crises of our time (altough the cosmetics business kept rising!). I’m not sure I have an explanation for the whole “eyebrows optional” trend

Half of the decade the world was at war with, you guessed it, World War II and this changed the economic and cultural landscape: while the men were at war, women really took a more serious role at the workplace. They stepped up and to boost morale, women were encouraged to put their best face forward. That meant makeup, my friends, but due to rationing and scarcity of materials, there weren’t a lot of options out there. But red lipstick remained a girl’s best friend. Hollywood contributes with the start of a real golden age in movies! The war is over, baby! There is a boom in the cosmetic industry and we startseeing more colors and products out in the market. There’s was a turn back into the femininity ideal of the beginning of the century, but this time makeup was here to stay! After the war the men came back to fill the roles women had to take back home when they were away, so there was a stronger emphasis on the wife and mother duties of a woman, but this time she had to look good while at it! The looks of the decade were inspired very much on Hollywood glamour and leading leadies like Elizabeth Taylor, Grace Kelly, Audrey Hepburn, Marilyn Monroe, and Ava Gardner.

Here’s where things started getting a little crazy….as you can see the focus went from the lips to the eyes, especially full top and bottom lashes with a cut-crease style eyeshadow background. The lips were mostly nude. One of the biggest shifts makeup trends took in this decade is the focus on youth and enhancing these features, such as those of British model Twiggy. The women rights movement really took off during this decade which you can see in the more relaxed and free flowing fashions. It was the era of hippie “peace and love” and the sexual revolution. Feminist movements continue to be at the center stage this decade, and for some reason tanning was kind of big deal. And I don’t mean a bit of color on the face, I mean all over baking. SPF products were only introduced during this decade, by the way! Music had a huge influence on the looks of women everywhere. A small urban “punk” trend brought an edge in looks (both male and female!) never seen before, but it was disco that really marked the look of the decade. Think Studio 54, for that disco ball inspired look women started sporting. The 70s splash of color forecasted the excess of the decade to come…

The first half of the decade there was an economic boom and it showed in the lifestyle of the 80s woman: Big hair, big colorful, big colorful lips, and a whole lot of blush that gave everyone insane cheekbones! Women began to have stronger, more powerful roles in the corporate world, which perhaps explains the need for massive shoulder pads. Music continued to influence style with icons such as Cindy Lauper, Boy George, and Madonna. While not everyone looked like them, even the most sofisticated of makeup back then was over the top. Remember T.V. shows like Dynasty and Dallas? Nothing demure about that! Ok, maybe we should tone it down a bit. But let’s keep the lip liner

The last vestige of the grandeur of the 80s was embodied in this new age, the age of the Supermodel. The 1990s “glamazon” was a sultry siren with a more toned down look, but still oozing sex-appeal (hence the pouty lips). But the 1990s were far from glamorous. after the economic and crime crises of the late 80s; unemployment really affected the younger people. The mood of an entire generation was captured with the grunge movement with bands like Nirvana, Pearl Jam, and Soundgarden. The style of the decade was equal parts sexy and ironic at the same time, like when the fashion world came up with the “heroine chic” look popularized by Kate Moss.

Ok, maybe we toned it down too much. Gimme some glitter, stat!

With the dot.com era, the economy was booming and things were looking up. Even after the Internet bubble burst, things were looking up. And the gloom of the 90s gave way for a whole lot of shine, mostly in the form of glitter and other shimmery shades on the eyes, lips, cheeks, everywhere! A big contributor of this was the return of the teen pop stars. Not that we didn’t have them before, but this time it was on steroids! Britney Spears, The Backstreet Boys, NSync, Christina Aguilera. They glorified youth more than ever before,which meant this was the consumer the industry cater to the most! It is too early in the 2010s to know what the decade will be known for. The prevalecent obsession with youth seems to have cartied over from previous decades with the ever rising popularity of cosmetic treatments. There is also a big vintage trend going on with a 1940s and 1950s red lips and cat eyes, but there is also lots of bright lips like in the 80s, not to mention a slightly healthier obsession with tanning like in the 70s. We’ll see how the decade pans out….
Which decade is your favorite? How about your least favorite? And what do you think this decade will be known for?

The 4 most annoying beauty trends of the season

Be a Makeup Pro with 5 simple tutorials!